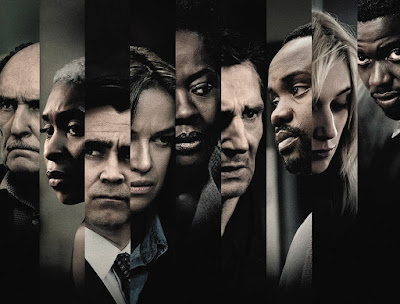 As funding for feature films gets harder to come by and more opportunities open up in TV production we have seen a growing number of big name film directors switching format from features to TV series in the last couple of years including Jane Campion, David Fincher, Danny Boyle, Park Chan-wook, Michel Gondry and Stephen Frears.

With all this talent moving across and the money available from Netflix, Amazon Prime et al, it’s no surprise that the quality of TV drama has raised considerably and the level of detail and production values are now on a par with features.

And yet for all the quality available I didn’t watch anything on TV last year that I enjoyed as much as the five films listed below and on many occasions found myself giving up on a series after episode 1.

My favourite film was Steve McQueen’s Widows and I tend to agree with his point of view about film vs TV. When asked by Sight & Sound if he had considered making Widows as a TV series like the original McQueen said, “some of this new TV is so rubbish because they try to squeeze out every drop and keep it going, even when it’s over. They drag you along even when the narrative has finished. Moviemaking is about craft, about storytelling, in the best way, just like the novel, the fairytale. It’s the best form because there is a beginning, a middle and an end. Rather than stretching it out. Even the best TV dramas over several series, usually I think you could stitch them together as one shorter thing.”