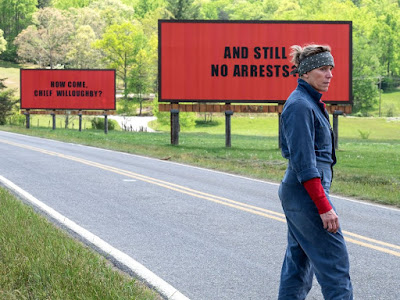 Three Billboards Outside Ebbing, Missouri has the razor sharp wit we've come to expect from Martin McDonagh (In Bruges, Seven Psychopaths) but adds a whole lot of heart.

The tonal balance is perfectly judged and it somehow manages to still be funny even during times of great tragedy. It's my favourite so far of this years big awards contenders and I'd be very surprised if Frances McDormand doesn't sweep the board for her hard as nails Mildred Hayes.

It seems fitting that such a ballsy female character should win in a year in which much has been done to raise awareness about gender inequality and sexual harassment within the industry in light of the Harvey Weinstein revelations.

Sam Rockwell is also excellent and fully deserves his nominations for best actor in a supporting role.
Posted by Andy Hague at 13:41