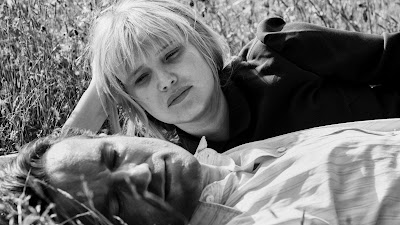 Cold War is a joy to watch from start to finish and well worthy of all the critical plaudits it has received and the best director award Pawel Pawlikowski won at Cannes.

As with Pawlikowski's last film, the equally stunning Ida, the sumptuous black and white photography by Lukasz Zal is presented in 4:3 ratio and the narrative style is simple and unfussy. It's great to see a film that covers a significant timescale (15 years) do so in a lean sub 90 minute running time proving that a film can be epic without having to be long. Pawlikowski trusts the intelligence of his audience to be able to fill in the blanks as the film makes several leaps forward in time.

Tomasz Kot is excellent as Wiktor but Joanna Kulig steals the show as the force of nature that is Zula. The scene where she comes to life in a club, drunkenly dancing to 'Rock Around the Clock' by Bill Haley & His Comets is superbly executed, bringing to life the excitement the new sound of Rock 'N' Roll was causing all over Europe in 1954.
Posted by Andy Hague at 15:48