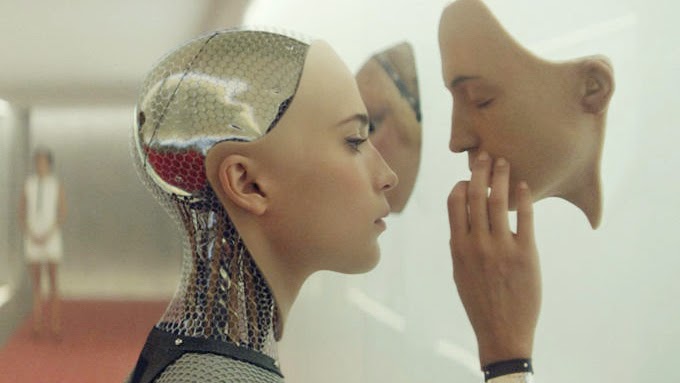 Ex Machina is an extraordinary piece of film making. Alex Garland's official debut as director is an intelligent and tense chamber piece with top notch performances from it's three leading players; Oscar Isaac proving himself to be one of the most versatile actors around, his aggressive CEO Nathan the polar opposite of his melancholy breakthrough role in last years Inside Llewyn Davis and Alicia Vikander giving a highly nuanced performance as Ava the robot - more convincing I thought than Scarlet Johansson's extraterrestrial in last year's Under the Skin, a film that shares much in common with Ex Machina.

Technically flawless the film has a brilliantly moody score courtesy of Portishead's Geoff Barrow and composer Ben Salisbury, who had previously worked with Garland on an unused score for Dredd, and stunning VFX from Double Negative, particularly the work on Ava's robotic exoskeleton.
Posted by Andy Hague at 21:54