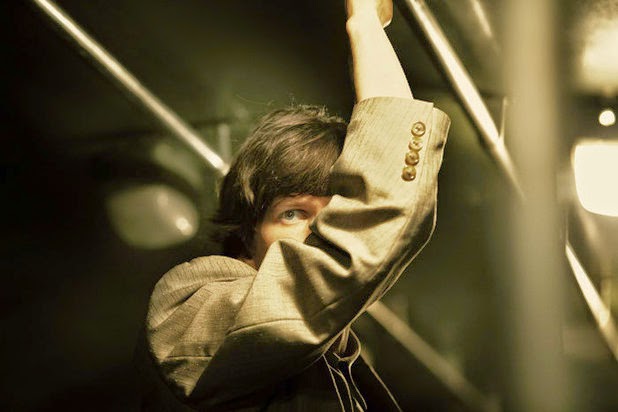 My favourite film of the year so far is Richard Ayoade's second feature The Double. Following up his fantastic debut, the 2010 coming of age comedy Submarine, Ayoade is proving to be one of the UK's most versatile directors.

Loosely based on the short story by Fyodor Dostoyevsky The Double stars Jesse Eisenberg in a dual role as shy and insecure Simon James and also his doppelganger, the confident, brash James Simon. Simon's world is turned upside down when James starts working for the same company and no-one else seems to spot the similarity.

Set in a non specific time and place.. it could be the past, it could be the future, Ayoade creates his own little world with amazing attention to detail. There's even a fictional TV show we catch a few glimpses of; The Replicator, starring Paddy Considine reminiscent of Garth Marenghi's Darkplace, Ayoade's genius spoof low budget 80's hospital drama broadcast in 2004.

Despite obvious nods to some of his heroes, especially Terry Gilliam and David Lynch, Ayoade's vision is very much his own. The complex sound design and layered atmospherics reminded me of Alan Splet's work on Lynch's Eraserhead, at times the hyper stylized nature of the sound allowing Ayoade to play with the audience's perception of where the sound is coming from. In one scene the sound of footsteps doesn't quite match the characters walking on screen and as they stop walking and the sound continues we realize that it wasn't actually their footsteps we were hearing.

Andrew Hewitt's tense string heavy score is a perfect fit for the claustrophobic visuals and the film is lightened in places with some obscure but incredibly beautiful songs, such as the sublime South Korean psychedelic folk track from 1973 that plays out over the end credits; The Sun by Kim Jung Mi.
Posted by Andy Hague at 12:09