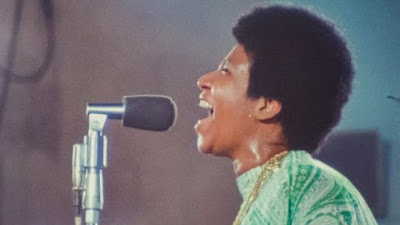 Amazing Grace is the filmed document of a performance of gospel songs that Aretha gave over two nights at the New Temple Missionary Baptist Church in Los Angeles in 1972. Production of the film was abandoned at the time due to technical issues - there were no clapper boards used during the shoot and the task of syncing around 14 hours of footage to the sound recording with no sync points proved impossible using the film editing technology of the day.

It wasn't until 2008 that the footage was all finally put together with the sound rushes and an edit could be made and yet the film was delayed a further 10 years by ongoing legal issues and Aretha's refusal to approve it's release.

The perseverance of Producer Alan Elliott (who was 7 years old when the original shoot took place) pays off as the completed film is absorbing and utterly mesmerising. The Queen of Soul gives a powerful, impassioned performance yet remains calm throughout, eyes mostly closed, as she lifts her vocals to a higher plane. You can feel the heat in the room as the intimate crowd are whipped up into a frenzy and it's their reactions and those of the Southern California Community Choir, along with the colourful MC Rev James Cleveland that make the film such a pleasurable watch.
Posted by Andy Hague at 18:27