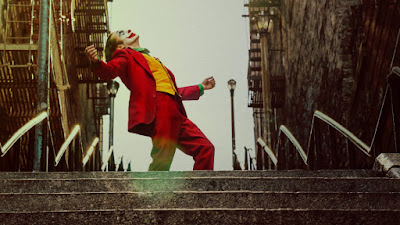 Another film currently splitting audiences right down the middle is Todd Phillips Joker. It's been hit with a barrage of bad press since it's premiere at the Venice Film Festival where it won the Golden Lion for Best Film.

I love the way Phillips has made an art film out of a comic book origin story and it's sure to surprise many viewers who will go to the cinema expecting a completely different type of film. Joaquin Phoenix gives an Oscar worthy performance as Arthur Fleck, his second film in as many years that owes a big debt to Martin Scorsese's Taxi Driver after 2017's You Were Never Really Here.

The scene pictured here where Joker dances down the subway steps in slow motion is one of the films most iconic but has caused controversy for it's use of the Gary Glitter song Rock 'N' Roll (Part 2).  I found the song choice to be entirely in keeping with the grotesque nature of the film and, despite what the tabloids have reported, Glitter (who is currently serving a 16 year jail term for sex with a minor) will not profit from it's use in the film as he sold off the rights to the recording and publishing of his entire catalogue more than two decades ago.

The makers of Once Upon a Time in... Hollywood faced a similar moral dilemma over whether they should use a Charles Manson song on the soundtrack and checked first to ensure that no-one connected with the Manson estate would profit.

This throws up the age old question, is it possible to seperate the art from the artist?

I know plenty of people who have stopped playing Michael Jackson music after the child abuse revelations that came out of the documentary Finding Neverland but it will be interesting to see whether people's stance softens over time. Unlike Gary Glitter, whose music was never particularly fashionable, Jackson's back catalogue may prove too good to be ignored.
Posted by Andy Hague at 14:38